Is Mallory Park Our Second And Last 2019 Race?

The team set out for our 2019 season with all good intentions. Due to the catastrophe of our Spa race last year however, we knew the new car would not be ready for the initial Croft and Silverstone rounds this year. Thus Pembrey and Mallory were the initial two races booked. Drivers Lowe, Lewis, Cox and Bucknell would race in each of the two 6 hour races at Pembrey while Lowe, Lewis and Abbott would race one each of the 20 minute sprint races at Mallory Park. The rest of the race calendar would be decided upon as the year progressed.

Initial thoughts were to cull the Anglesey 24 hour race as we would enter the Zandvoort race the week after. We didn’t want any potential car damage at Anglesey to scuttle the Zandvoort trip. However, we find that the Zandvoort race was perhaps not a race at all? It seemed that the UK C1 Club would be guests within a European grid and at the time of our enquiry, we were the second of UK teams to enquire. So maybe this was not a race after all? The Zandvoort race didn’t seem to be marketed, other than a link from the C1 Club website. By the time we revisited Anglesey as an option, diary conflicts now meant Anglesey was a no-go too. And it’s diary conflicts this year that has meant that Snetterton in August and the second Croft race in September would be non entries as well. There is also confusion in that at the beginning of the year, our race calendar shows a Brands Hatch race on 16th/17th November but now that date on the C1 Club website shows 9th/10th. We can only but assume the dates have changed without notification and thus we cannot race the 9th/10th November. What about Spa you ask? The simple answer is, we have chickened out this year. With four different collisions last year and a total car write off, we’ll give it a miss this year and have our car ready for early 2020 rounds next year.

How Did It Go At Mallory Then?

We had a great weekend overall. Lots of male bonding, beer, curry and banter. Friday was the Javelin track day which saw many race cars there too in preparation for the weekend. There was the ever present Javelin jibe at the drivers briefing to race drivers, not to impede those in road cars and specifically C1’s for “tyre squeal”. Come on Javelin, what do you expect if you run a track day prior to any race day? Race cars will turn up and it seems, a fair majority of your customer base on Friday. But then again, with turbo assisted road cars far outpacing us little C1’s on the straights, the overtaking rules for these road cars went out the window very quickly, never enforced and by lunch, one could argue there was no overtaking rules at all. Indeed, we were chastised for inadvertently leaving the lap timer on during one of the early morning sessions, but again by lunch, no-one in the pitlane seemed to give a damn and no-one was checking anyhow. All in all, the afternoon session pretty much became a test day afterall, with nobody adhering to any driver briefing rule. It seemed that many cars had gone at lunch and there was minimal Javelin staff around. Never a complaint, always an observation!

Saturday we spent a rather damp day at the Silverstone Classic. High on the agenda was to visit the Auction Room, watch a little racing and mosey around. Tesla were on hand to drive people around the circuit and we spent some time around the car clubs, driver Lewis getting all excited around the Datsun Z Club looking at modifications for his own 1971 240Z while Lowe and Abbott get all fuzzy with the Ferraris. An early evening was on the cards tonight as up early for race day.

How Did It Go At Mallory Then?

Sunday it was race day. The race regulations for today seemed a little sparse to say the least. Just a few pages and top of our agenda of questions was, how would the race start and how would times be calculated with three drivers spread over one 30 minute qualification period? There was nothing in the regulations for any clue, other than the timetable, which seemed tight for sign-on, scrutineering, drivers briefing and qualification.

All three Bastards rocked up early on the day, all suited and booted with the car full of fuel as instructed per the sardonic reference to “Dinner for One” within race newsletter the week prior, stating that the club was “nothing if not sticklers for tradition” in relation to weighing, only to find that there no weighing at all! And that seemed to be the theme for the rest of the day. Nothing seemed in tune. It was only while in Assembly for qualification were we told where to change drivers by the green pits and handed a slip of paper to write down driver names and stint times. Everything seemed lackadaisical. And when we asked how will qualification work? The answer from a club official was “I don’t know. I’ll have to find out”. Really!

You see, we had already worked out that if like us, being three drivers over three races, we would need to change drivers twice and already be at a disadvantage. Heaven forbid, but any other team could qualify with their fastest driver over the whole of the three qualification stints or worse still, a solo driver entered into all three races will have a full half hour qualification and two 20 minute races compared to our poor driver Abbott, who will experience less than 10 minutes qualification before his race after Lewis and Lowe. Something seems awry, if not a little less than unfair. But hey, never a complaint, always an observation!

Now, one thing that we did overhear was that this Mallory sprint weekend was a beta, pilot or test for a possible Sprint Championship in 2020. The rumour was that the C1 Club would be looking to establish a championship sprint series in 2020 alongside the endurance races and from our viewpoint, that would be most excellent as all Bastards have come from a Caterham background where two 30 minute sprints were the order of the race calendar weekend. Therefore and dear C1 Club, please put our name down for the 2020 Sprint Championship.

To set the scene and get you in the mood. Biblical rain was forecast for the whole day, quite reverse from Saturday’s forecast. No wet weather gear for the drivers was packed either as they came to the area Thursday night in shorts and Havaianas following Wednesday’s hottest day on record. For sure, our tyres were baptised Moses as there was sure to be mighty puddles of water to part.

Post qualification, Lewis was P11 for race one, Lowe P17 for race two and Abbott P9 for race three. All three found there was more grip than expected and perhaps a little disappointed with their positions, nothing better could have been attained with less than 10 minutes each. Indeed Lowe only had 4 flying laps compared to Lewis’s 6 and 6 of Abbott. Lowe was experiencing difficulty with the windscreen clearing as there seemed a fault on the blower. 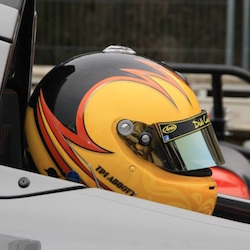 With his fastest lap of 1:11:670, Lewis ended the race at P12 with two cars not finishing the race. With the race stopped twice and the circuit closed twice for two recoveries, the result was concluded from the first stoppage at 8 laps. Lewis was able to rescue the car twice from two spinners at Gerrards with millimetres to spare and a clench of buttocks. At the end of lap one, Lewis was P9 but falling to P12 by lap five due to the first spinner and a little off roading. Elevating back to P11 by lap 6, he was back to P12 to finish the race at lap 8.

Lowe too had a great start, while elevating himself from P17 to P14 by the end of lap one and P13 on lap two and three. Lowe finished a very respectable P12 of 19 cars ending the race. Lowe’s fastest lap was 1:15:802 but throughout the race he had to contend with a misty windscreen as the blowers were not working. At one point, Lowe was worried that he may have to pit as he simply could not see, just following the brake lights in front.

A little ambiguity here as the race classification places Abbott as P10 while the grid sheet and qualification shows him as P9 for the race. Nonetheless, he was P9 in lap one and P8 by lap 2 and where he remained until lap 9 where he was positioned back at P10. He hovered mid/late grid until the latter laps of the race where he was hit by a back marker who outbraked at Shaw’s Hairpin, catapulting him into a spin with a final result of P16 of 17 cars with 17 laps raced. Abbot’s fastest lap was 1:13:663 on his penultimate 16th lap.